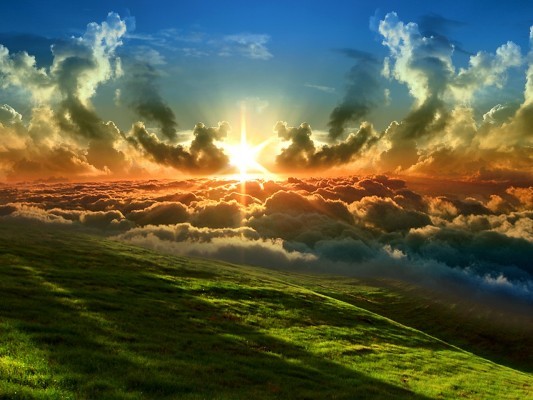 [Note to the reader: "God" is used throughout as a signifier to point to wherever you put your worship. It could be conventional religions as I will mainly address, but you could just as easily replace it with Gaia if you "put your worship" there--if the environment is your ultimate concern. or you could replace it with polytheistic beliefs such as Hinduism. Or maybe you put your worship in the Universe, Consciousness, or Community. Consider that whatever your ultimate concern is, the concepts in this article can apply to that thing as "God" for you. Doing this will allow you to get the most from this article. -Jason D McClain]

It’s a provocative question, isn’t it?

Why even ask it? It is fraught with predicable emotional triggers and will produce reactions that may blur the importance and the point of the topic at hand.

Before we begin to explore the question, we need to lay the ground on which we will stand: stages of egoic and emotional development. Stages that we interpret the world through and react emotionally from.  Stages through which we will interpret every aspect of our lives--events occurring around us, the actions of others as they relate to us, the world we navigate through politically, economically, romantically, and, yes, our spirituality and the nature of the Divine.

So if we are to examine our relationship to God (or “the Divine) then we must begin with an understanding of the lens we gaze through.

"God is like a mirror. The mirror never changes, but everybody who looks at it sees something different."  --Rabbi Harold Kushner

From pre-personal to personal to trans-personal. From vengeance to justice to grace. From pre-rational to rational to trans-rational. From ego-centric to enthno-centric or gender-centric or nationalistic to world-centric. From unconscious to conscious to super-conscious. These are just some of the ways we can label the grossest stages of development of the Self—and they are stages of increasing wholeness and increasing embrace. Each stage transcends, yet also include the benefits of the former. Each is noted for its increase in capacities and increase in the ability to hold an ever-increasing number of perspectives. We could also think about these stages as an expansion of what an individual can identify with or as. From ego-centric to ethno-centric / gender-centric / nationalistic to world-centric; identifying as just an individual to identifying as a member of a community or collective of individuals to identifying as a member of a global community—a citizen of the planet and a member of its ecosystem. Plainly put: our stage of self-development will determine our world-view—and that world-view will evolve over time. And that evolution will have a directionality.

Human development can be divided into three major phases: pre-conventional, conventional and post-conventional, or pre-personal, personal and transpersonal (Wilber, et.al., 1986). This applies to the development of cognition, morality, faith, motivation and the selfsense. The infant enters the world unsocialized, at a pre-conventional stage, and is gradually acculturated into a conventional world-view, whether it be religious or secular. A few individuals develop further into post-conventional stages of post-formal operational cognition (Pfaffenberger, et.al., 2009), post-conventional morality (Sinnott, 1994;), universalizing faith (Fowler, 1995), self-actualizing and self-transcending motives (Maslow, 1971), and a transpersonal self-sense (Cook-Greuter, 1994; Wilber, 1980, 1983, 20001).

We could say that one of the primary practices (as well as one of the primary indicators of personal evolution) is the ability to take on an ever-increasing number of perspectives; the ability to understand—even if not agreeing with—an ever-increasing number of perspectives or “views” of or “from” a given place.

And that lens—or lenses—is the filter through which we view the world as well as being the platform we will likely react from. This is not a box we can put ourselves or others in. It is not a classification as rigid as a “type”. Think of it more as a probability: a weather forecast, or a general orientation within high odds. Think of it more as a lump or a wave. But even still, the fact that we will likely interpret through and react from our “stage” of development of the “self” is hard-wired as a probability can get.

And, the endeavor we call “personal evolution” is the process of activating movement and moving through those stages.

Why is this important?

In the process of personal evolution we have both the mechanisms to create, and the path to enjoy, true peace within--and to reduce conflict without. An ever-expanding ability to hold an ever-increasing number of perspectives leads to a life that experiences greater ease, reduced fear and reduced anger, greater empathetic capacities, increased self-acceptance, increased capacities to handle whatever life may throw at you—and respond more resourcefully, and ultimately, leads to an aligned, purpose-filled and full-filled life.

As within, so without.

In recent history, it has become commonplace in personal development circles and communities for us to realize that our relationship to ourselves is very important—it is an accepted fact that it will determine a great deal of our experience materially, inter-personally, and emotionally. It may be thought of as self-concept, or self-esteem and self-acceptance, self-care, and self-love. This shows up in particularly high-relief/ particularly sharp in contrast in work with relationships where it is clear to more and more people (whether we like it or not) that our relationship with our self will determine our relationship dynamics with others: how well do we honor boundaries both for ourselves and for others? Do we feel we deserve to be happy and deserve to have a relationship in which we are treated well—with kindness and respect and love? How easily and openly do we communicate?

We can usually boil it down to the essence of: “you can’t have a loving relationship with another if you don’t love yourself”. There is more granularity more recently in some of the distinctions applied by the Integral community using the stages we laid out at the beginning of this writing applied to relationships; what are the qualities and characteristics of a “Stage 2 relationship, a “Stage 3 relationship” and so on.

This is relevant for precisely the reason that for many of us, our relationship to the Divine may be the most important relationship of all.

It is an existential spiritual question. The very nature of how we experience Divinity is at stake. Examining this question will not only allow us to see where we limit ourselves spiritually, but also give us access to improving our state of health and vitality in the spiritual domain—determining to what degree we can shine the Light in the world in a way that transcends religion, allowing us to achieve our highest spiritual ambitions. In essence to become the highest within us—to emulate and embody more consistently our most precious qualities, characteristics, and spiritual ideals of universal love, compassion, and acceptance as taught by all of the world’s great spiritual traditions; to close the gap between who we are and who we strive to emulate and … to be.

If we are to realize our highest spiritual potentiality, our relationship to God is something that not only can and will be examined in the process, but must be examined.

As above, so below.

“God” is simultaneously personal and public, internal and external, and it is one of the hottest potatoes to throw around these days. Not just because for a growing number of people, belief in a God has fallen out of fashion—that would be the easiest hurdle to clear—but even worse, we have the full spectrum of religious beliefs on parade from Christian fundamentalists to radical Islam. “Spiritual but not religious” is a categorization that over 20% of the population in America now identifies as—and it is a category that is growing amongst the younger generations with 30% of the people under 30 years of age identifying themselves in this way.

What is true for one group—or one individual—is seldom true for another.

And that is before we even get to the discussion of the mytho-poetic themes of the world’s great religious traditions; was Jesus really born of the Virgin Mary? Was Lao Tzu really born as a 900 year-old man? Is the earth really resting on the head of a giant serpent (or the shell of a giant tortoise)? And of course, the subject of great debate most recently it seems: is the Earth really only 6,000 years old? Are these facts—with belief in them required to enter into the afterlife? Or are they gorgeous and useful poetic metaphors pointing to a greater truth in a way that people at the time could accept, pointing to Divine power.

But the real question to ask is: does any of that really matter? Should it?

A large enough number of people take the sacred texts literally that they must be honored in the conversation. Still others—and an ever-increasing number—do not, and look more to the teachings and the higher principles at play, shedding more and more of the convention, the traditions and, yes, the dogma. We do so because we are moving in a direction that we all do in our lives, and as groups in general—a direction of increasing wholeness, and ever-increasing embrace and acceptance of ourselves—and differences we have with others.

And there are some who are looking beyond the differences the great spiritual traditions have to the universal truths that they all share.

We really only have two choices when we are faced with facts that do not fit our belief structures, and this is most glaring when it comes to religious beliefs.. We can either expand our beliefs to include the facts on the ground, or we can dig in and regress and become more insular, ejecting the facts and reinforcing our belief structures.

This expansion is another way to point to the activity of personal evolution actually occurring. We could say the same about regression, truthfully, as it is included in the overall process, even knowing that the direction we hope to move is one of expansion. But, the eventual expansion is what leads to peace, ease, increased capacities, and all the other goodies we get to experience, even if it comes as the result of moving through the death-throes, and for some, the process as we shed the limitations of our previous previously-held beliefs -  is a painful process that can give some an experience that ranges from confusion to grief.

A process we will confront together in Part 2 of this piece.

The Myth of Self-Sabotage [Webinar]